We all know that Linux is awesome, but here's a list of especially awesome things related to the Linux ecosystem. elementary OS is an Ubuntu-based desktop distribution. Some of its more interesting features include a custom desktop environment called Pantheon and many custom apps including Photos, Music, Videos, Calendar, Terminal, Files, and more. It also comes with some familiar apps like the Epiphany web browser and a fork of Geary mail.

Fedora (formerly Fedora Core) is a Linux distribution developed by the community-supported Fedora Project and owned by Red Hat. Fedora contains software distributed under a free and open-source license and aims to be on the leading edge of such technologies. Fedora has a reputation for focusing on innovation, integrating new technologies early on and working closely with upstream Linux communities. The default desktop in Fedora is the GNOME desktop environment and the default interface is the GNOME Shell. Other desktop environments, including KDE, Xfce, LXDE, MATE and Cinnamon, are available. Fedora Project also distributes custom variations of Fedora called Fedora spins. These are built with specific sets of software packages, offering alternative desktop environments or targeting specific interests such as gaming, security, design, scientific computing and robotics.

Linux Mint is an Ubuntu-based distribution whose goal is to provide a more complete out-of-the-box experience by including browser plugins, support for DVD playback, Java and other components. It also adds a custom desktop and menus, several unique configuration tools, and a web-based package installation interface. Linux Mint is compatible with Ubuntu software repositories.

Ubuntu is a complete desktop Linux operating system, freely available with both community and professional support. The Ubuntu community is built on the ideas enshrined in the Ubuntu Manifesto: that software should be available free of charge, that software tools should be usable by people in their local language and despite any disabilities, and that people should have the freedom to customise and alter their software in whatever way they see fit. "Ubuntu" is an ancient African word, meaning "humanity to others". The Ubuntu distribution brings the spirit of Ubuntu to the software world.

CentOS as a group is a community of open source contributors and users. Typical CentOS users are organisations and individuals that do not need strong commercial support in order to achieve successful operation. CentOS is 100% compatible rebuild of the Red Hat Enterprise Linux, in full compliance with Red Hat's redistribution requirements. CentOS is for people who need an enterprise class operating system stability without the cost of certification and support.

The Debian Project is an association of individuals who have made common cause to create a free operating system. This operating system is called Debian. Debian systems currently use the Linux kernel. Linux is a completely free piece of software started by Linus Torvalds and supported by thousands of programmers worldwide. Of course, the thing that people want is application software: programs to help them get what they want to do done, from editing documents to running a business to playing games to writing more software. Debian comes with over 50,000 packages (precompiled software that is bundled up in a nice format for easy installation on your machine) - all of it free. It's a bit like a tower. At the base is the kernel. On top of that are all the basic tools. Next is all the software that you run on the computer. At the top of the tower is Debian -- carefully organizing and fitting everything so it all works together.

Mageia is a fork of Mandriva Linux formed in September 2010 by former employees and contributors to the popular French Linux distribution. Unlike Mandriva, which is a commercial entity, the Mageia project is a community project and a non-profit organisation whose goal is to develop a free Linux-based operating system.

Arch Linux is an independently developed, x86_64-optimised Linux distribution targeted at competent Linux users. It uses 'pacman', its home-grown package manager, to provide updates to the latest software applications with full dependency tracking. Operating on a rolling release system, Arch can be installed from a CD image or via an FTP server. The default install provides a solid base that enables users to create a custom installation. In addition, the Arch Build System (ABS) provides a way to easily build new packages, modify the configuration of stock packages, and share these packages with other users via the Arch Linux user repository.

CoreOS is a Linux-based operating system for servers. Built from the ground up and designed primarily for the modern data centre, CoreOS provides specialist tools for making the system secure, reliable and up-to-date. Some of the more interesting features of the distribution include reliable updates and patches via FastPatch, a dashboard for managing rolling updates via CoreUpdate, a docker for packaging applications, as well as support for bare metal and many cloud providers.

Kali Linux (formerly known as BackTrack) is a Debian-based distribution with a collection of security and forensics tools. It features timely security updates, support for the ARM architecture, a choice of four popular desktop environments, and seamless upgrades to newer versions.

Puppy Linux is yet another Linux distribution. What's different here is that Puppy is extraordinarily small, yet quite full-featured. Puppy boots into a ramdisk and, unlike live CD distributions that have to keep pulling stuff off the CD, it loads into RAM. This means that all applications start in the blink of an eye and respond to user input instantly. Puppy Linux has the ability to boot off a flash card or any USB memory device, CDROM, Zip disk or LS/120/240 Superdisk, floppy disks, internal hard drive. It can even use a multisession formatted CD-RW/DVD-RW to save everything back to the CD/DVD with no hard drive required at all.

Ubuntu Studio is a variant of Ubuntu aimed at the GNU/Linux audio, video and graphic enthusiast as well as professional. The distribution provides a collection of open-source applications available for multimedia creation.

Tails is a live system that aims to preserve your privacy and anonymity. It helps you to use the Internet anonymously and circumvent censorship almost anywhere you go and on any computer but leaving no trace unless you ask it to explicitly. It is a complete operating system designed to be used from a USB stick or a DVD independently of the computer's original operating system. It is Free Software and based on Debian GNU/Linux. Tails comes with several built-in applications pre-configured with security in mind: web browser, instant messaging client, email client, office suite, image and sound editor, etc.

This is a great introduction to the Linux command line. - @4iar

You've experienced the shiny, point-and-click surface of your Linux computer—now dive below and explore its depths with the power of the command line.

Good book that teaches you the basics of Debian GNU/Linux administration. - @elninosi

It covers all the topics that a competent Linux administrator should master, from the installation, update of the system, up to the creation of packages and the compilation of the kernel, but also monitoring, backup and migration. Plus advanced topics to secure services, automated installations, or virtualization.

Currently this book provides an introduction level knowledge of Bash.

Organized by the Linux Foundation, it's a great free course to learn basics about Linux. - @aleksandar-todorovic

If you used Windows and decided to switch to Linux, this course should help you to find their alternatives. It's pretty short and you can finish it in a day. - @aleksandar-todorovic

You cannot talk about a unified Linux look because there is no such thing.

GNOME 3 is an easy and elegant way to use your computer. It is designed to put you in control and bring freedom to everybody. GNOME 3 is developed by the GNOME community, a diverse, international group of contributors that is supported by an independent, non-profit foundation. 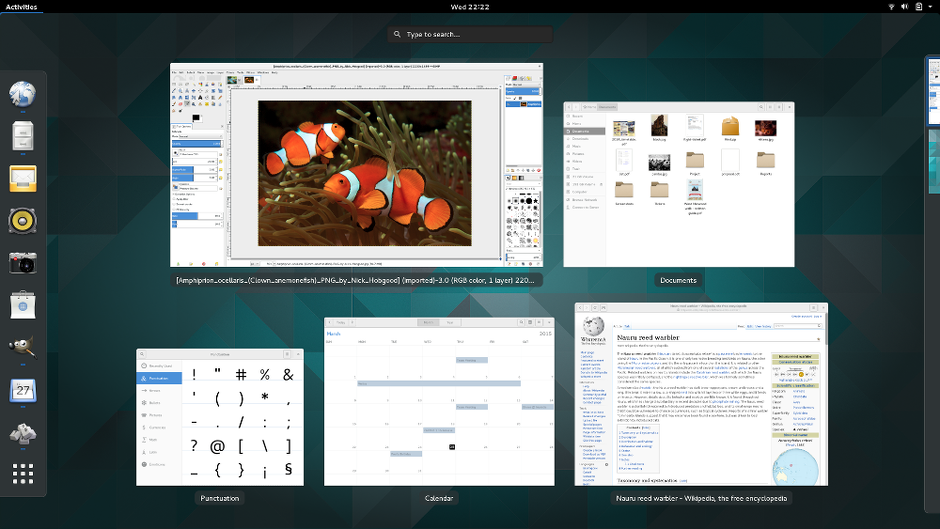 The KDE® Community is an international technology team dedicated to creating a free and user-friendly computing experience, offering an advanced graphical desktop, a wide variety of applications for communication, work, education and entertainment and a platform to easily build new applications upon. We have a strong focus on finding innovative solutions to old and new problems, creating a vibrant atmosphere open for experimentation.

Xfce is a lightweight desktop environment for UNIX-like operating systems. It aims to be fast and low on system resources, while still being visually appealing and user friendly.

The "Lightweight X11 Desktop Environment" is an extremely fast-performing and energy-saving desktop environment. Maintained by an international community of developers, it comes with a beautiful interface, multi-language support, standard keyboard short cuts and additional features like tabbed file browsing. LXDE uses less CPU and less RAM than other environments. It is especially designed for cloud computers with low hardware specifications, such as netbooks, mobile devices (e.g. MIDs) or older computers. LXDE can be installed on many Linux distributions including Debian, Fedora, OpenSUSE and Ubuntu. It is the standard for Knoppix and lubuntu. LXDE also runs on OpenSolaris and BSD. LXDE provides a fast desktop experience; connecting easily with applications in the cloud. LXDE supports a wealth of programs that can be installed locally with Linux systems. The source code of LXDE is licensed partly under the terms of the GNU General Public License and partly under the LGPL.

The list of awesome Linux applications that you should be using.

Not based on any desktop environment¶

Q: Why third-party apps? Why not the official clients?

A: Because, in 99% of the cases, official clients are proprietary.

A friendly place to start for the Free & Open Source Software and Linux curious.

Find better alternatives to the software you already use or a replacement for software you cannot or do not want to use.

The Linux Foundation is a non-profit consortium dedicated to fostering the growth of Linux. Founded in 2000, The Linux Foundation sponsors the work of Linux creator Linus Torvalds and is supported by leading Linux and open source companies and developers from around the world.

For the community, by the community, Linux.com strives to be the central source for informed, reasonable, and intelligent Linux information, software, documentation and answers across the server, desktop/netbook, mobile, and embedded areas.

Although its design is outdated, Linux.org is (probably) the most popular forum and it's full of awesome Linux tutorials categorized by their difficulty. - @aleksandar-todorovic

The Linux Kernel Organization is a California Public Benefit Corporation established in 2002 to distribute the Linux kernel and other Open Source software to the public without charge.

Opensource.com is an online publication focused on how open source is applied to different areas including business, education, government, health, law and other disciplines of life.

Our goal is to further the open source way by sharing the open source movement. Our community of readers is made up of those who believe that open participation and sharing can tackle the business, social, environmental, and technological challenges facing us today.

Linux.die is a resource with documentation, tutorials, books, etc in Linux.

This repository is licensed under the Do What the Fuck You Want to Public License. Its full content is located in the LICENSE file.